Spurs quartet closing in on return 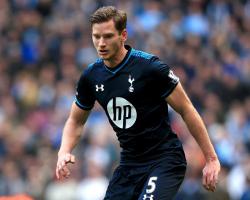 Kaboul had been sidelined for two months with a thigh problem while the other three had not played since December.

All four are now closing on in a return to competitive action ahead of Wednesday's huge match against Manchester City at White Hart Lane.

Sandro came off at half-time during the behind closed doors friendly on Thursday while Kaboul, Paulinho and Vertonghen all played an hour before being substituted.

Manager Tim Sherwood, who was at Upton Park to watch the 3-0 win, was happy to see the quartet back in action.

"It is great news to see so many lads returning from injury at such a crucial time," Sherwood told Spurs TV.

"They have come through okay and it's good to see them get some minutes under their belts. There is nothing like playing.

"With players of this quality coming back to fitness it reinforces the fact that we have strength and depth in the squad. They are players with real quality and ability. That's what I look for."

The only two players who have also been sidelined through injury of late - Andros Townsend and Erik Lamela - did not feature.