Imagine a floppy-haired Francesco Totti at his peak, a dynamic Diego putting Werder Bremen on the map, Joaquin defying time in Seville. The common denominator? Kappa.

The Italian sportswear brand has long been a purveyor of​ some of the most understated and beautiful football shirts around.

"Cheese and wine, cigarettes and coffee, Kappa and Italian football; some things are just meant to go together."

We recently sent @krishan_davis
out to Turin to celebrate 20 years of @Kappa_UK Kombat and to chat to the OG designer, Emanuele Ostini.

But what do all of these icons of the football world have in common, you ask? They are all key members of the Kappa KOMBAT family, that's what - a technology developed 20 years ago that would revolutionise football shirt design, moving away from the baggy, heavy shirts of the 90s.

The elasticated fabric offered a closer fit and 50cm of stretch, giving the attacker that extra yard over the defender whether or not they had a handful, while also helping the referee spot a foul.

Speaking about the unique design, famed Italian football photographer Salvatore Giglio once said: "The KOMBAT was the twelfth player on the pitch because it allowed us to take different photos. it made for spectacular photography." Sportswear giants adidas, Nike and Puma have since attempted to replicate the skin-tight shirt at both club and international level, with varying degrees of success. But it was lowly Kappa who were the innovators.

We at 90min's The Switch were fortunate enough to be invited to the city of Turin, nestled in the Italian Alps and home of Juventus (and Torino), to celebrate the 20th anniversary of the brand's most iconic shirt. You can read our interview with designer Emanuele Ostini ​here.

To mark the occasion, here is our ranking of Kappa's ten greatest Kappa KOMBAT shirts. Prepare for the nostalgia ride of your life... *Goes on Classic Football Shirts and filters by brand and year*.

One for the football hipsters to kick off. Belgian side Genk benefitted from Kappa's revolutionary technology in the early noughties.

We'll see this simple design again later in the list, but you just can't go wrong with a popping blue sponsor on a white strip with blue trim. The vibrant green and orange, the zany font of the sponsor, the hooped socks; t

And it's gone down in Die Werderander history, too, as the northern German side landed their first-ever double while wearing it, clinching the Bundesliga title and DFB-Pokal in 2004.

If you're wondering, Young Spirit make...questionable shoes, some examples of which you can find ​here. In truth, it is difficult to go wrong with the instantly recognisable red and white halves of the Feyenoord home shirt.

And Kappa didn't go wrong back in 2007, knocking it out of the park with their logo, the Rotterdam club's crest and even the sponsor looking fantastic on the KOMBAT skin fabric.

Prachtig, as they say in the Netherlands. The most modern shirt on the list is Kappa's spectacular camo design for ​Napoli in 2018.

The dazzling geometric print was a throwback to the bygone era of 90s football shirt design, and also a notable move away from Kappa's understated templates of the noughties.

A thing of beauty. One of two international shirts to make the list, Wales' home shirt between 2004 and 2006 exemplified the simple beauty of Kappa's KOMBAT design.

The nation's colours, the Welsh crest, the player's number in a lovely typeface and the Kappa branding on the sleeve.

That's it, that's the shirt.

Pictured above: Giggsy whips one in from the left for what was surely an excellent assist. A truly iconic Premier League shirt, ​Spurs donned the Kappa KOMBAT for two years back in the early 2000s - back when teams didn't have new kits every single year, let alone third and even FOURTH kits. Back when yer da' was a happier man.

We've seen similar back at no.10 with Genk's away number, but the clean design and far more subtle sponsor means the north Londoners slot in higher up

A simple but brilliant kit. Sponsor-less shirts are always a winner, and Betis were the team to benefit with this lovely number.

Kappa have a longstanding relationship with the Seville club and are still manufacturing their kits to this day.

Joaquin - pictured above (left) in 2003 - is still there repping the KOMBAT, too. 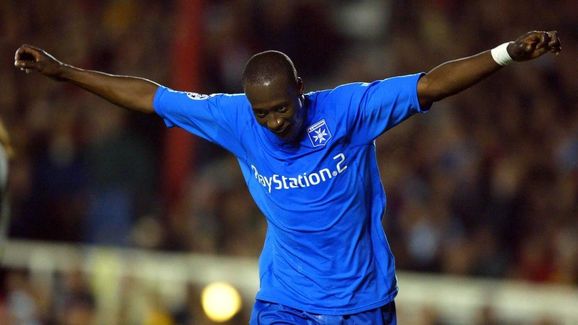 Those born post-1995 may not remember Auxerre being good, or perhaps even existing given that they currently reside in the lower echelons of France's Ligue 2 (that's 'deux', not 'two').

However, they were good and their kits slapped. Big time. The home shirt from this season deserves *at least* an honourable mention, so I've made it the main photo, just to throw you off.

The blue version - donned in the Champions League alone - most certainly does take its place in the top three. Another simple design similar to Genk's and Spurs', the branding shifted to the sleeve and the fantastic PlayStation 2 sponsor gives it the edge. A very good year for Champions League strips. While Roma's home shirt from this season was special, the version for Europe's elite club competition was spectacular.

With the traditional burgundy on the main body of the shirt, Kappa's designers added a splash of colour to the sleeves with a vibrant orange, replicated in the branding and shirt numbers.

The Mazda sponsor emblazoned across the torso has Kappa set about creating something special as soon as they secure the coveted contract for the Italy national team back in the late 90s, and the European Championship in 2000

Twinned by Design: Did you know that the Auxerre 2002-03 away shirt is the same Kappa design as Italy at Euro 2000? pic.twitter.com/kXQX2hg103