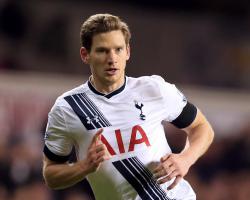 Vertonghen, an ever-present for Mauricio Pochettino's side this season, fell awkwardly following a challenge by Connor Wickham and was later substituted

The defender left Selhurst Park on crutches and, after undergoing a scan, has now been ruled out for the foreseeable future.

"Further assessment & scans have confirmed that @Jan_Vertonghen sustained damage to his medial collateral ligament in his knee at Palace," Tottenham tweeted.

"Our medical staff will continue to monitor his progress during his rehabilitation to determine when he will be ready to return to training."

Wickham, who appeared to catch Vertonghen in the face with his elbow, was charged with violent conduct by the Football Association for the incident which was missed by referee Martin Atkinson.

Vertonghen's injury will come as a blow to Tottenham who are chasing their first league title since 1961.

Following their 3-1 victory at Selhurst Park, Pochettino's side are fourth in the table, five points adrift of leaders Leicester.

Tottenham travel to Colchester in the fourth round of the FA Cup on Saturday before league games against Norwich, Watford and Manchester City