Slavko Vincic fall on deaf ears. Hugo Lloris stares down the barrel of a one-match suspension after getting sent off. With three group stage games remaining, and just one point to show for their efforts, it feels like the end for Tottenham.

So how on earth did we get here?

It's a cliche, but it all starts with the right attitude. The never say die spirit. The idea that magical things can happen against the odds, with the right belief and application. That's exactly what saw from both Liverpool and Tottenham this week. Two teams fans of the Premier League should unite in feeling pretty proud of.

After that stirring comeback at Anfield, it seemed like all the magic of the ​Champions League had been used up, seemingly resigning Tottenham to a low key exit in the Netherlands, following a pretty tame performance in the first leg of their semi final against Ajax.

And that script was followed to a T during the opening 45 minutes: Matthjis de Ligt shrugged off Kieran Trippier to guide a header past Lloris from a corner in the opening five minutes, before Hakim Ziyech smacked a stonker to put the tie to bed.

Tottenham, dead and buried. No hope.

But let's take a second to rewind.

Spurs take one point from their opening three games, needing victories against PSV and Inter at Wembley. They get the job done, with late drama all over the gaff. Kane and Christian Eriksen are given the freedom of Enfield for their contributions. Tottenham hammer Barca's reserves in the second half, but

When all hope is lost, the away fans finally suck the ball into the net past the Dutch goalkeeper, Lucas tapping home Kane's low cross to finish off a flowing move featuring key contributions from Eriksen and Erik Lamela. 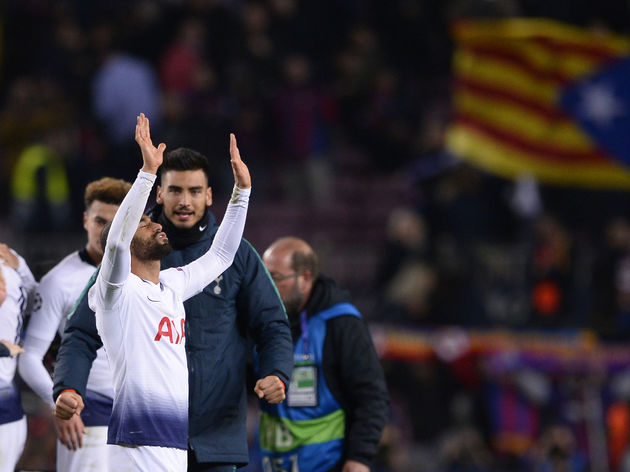 "We suffered because when we finished the game we did not know the result at Inter. It was two very difficult minutes, but in the end of course we were so happy. It's so important for the club."

Written off against Borussia Dortmund, Spurs went through 4-0 aggregate winners in the last 16. Son Heung-min, Jan Vertonghen, Fernando Llorente and Harry Kane gave the club's fans a memorable few weeks without too much tension with two wins over the then Bundesliga leaders.

A light lunch, so to speak.

The quarter final draw sees Tottenham pitted against Manchester City. Arguably the best team in Europe, charging towards another Premier League title despite constant pressure from Liverpool. Methodic and ruthless in their approach, it's the perfect draw for Guardiola's side.

On 9 April, in the first leg at Tottenham's new stadium, Danny Rose is adjudged to have handled inside the area, but Sergio Aguero sees his spot kick saved by Lloris. Before the hour mark, Harry Kane goes off injured after tangling with Fabian Delph. Just under 20 minutes of constant City pressure on their goal ensues, but Spurs hold out.

And then Son strikes. Tottenham have the slimmest of advantages to take to the Etihad, but everyone backs City to overturn the deficit, and rightly so: Pep Guardiola's side usually score at least four goals at home.

And they do just that, but, and here comes the twist, Son scores twice and Llorente bundles one in with his arse. There was also a disallowed Raheem Sterling goal late on, but we're all far too exhausted to go over that one again. “No one believed in November we would be in this position in April. But we had the belief and that is the most important thing."

On 30 April, Donny van de Beek scores inside the opening 15 minutes, and Tottenham look woefully out of their depth. Victor Wanyama is being mercilessly mugged off by Frenkie de Jong in central midfield, and without ​Son and ​Kane up front they fail to land a meaningful punch throughout the 90 minutes, both De Ligt and Daley Blind comfortable in central defence.

A goal down heading into the second leg, ​Tottenham are done. Down and out. Nobody gives them a chance against an Ajax side heralded as 'a breathe of fresh air', 'an exciting mix of youth and experience'. They're clearly on another level to Spurs and headed for something magical. "Thank you, football; thank you these guys. I have an amazing set of players who are heroes.

Lucas Moura is now a certified Spurs icon and Mauricio Pochettino may have ditched that damaging 'nearly man' tag that's been weighing him down over the last few years, even if his side do end up losing the final.

Ultimately, this past week has taught the football world one crucial lesson: never stop dreaming. Even if your team have one point from their first three group games. Even if they have to stop arguably the greatest footballer ever to grace our television screens. Even if they have score three goals in 50 minutes against the next big thing.

Emotion gets the better of the Argentine after leading Spurs to Madrid. pic.twitter.com/d1qzkLWj0e

Soak it in. You can never predict the next twist in a story as exhilarating and unpredictable and Tottenham's, but above all else, enjoy it. This is what it's all about.

"The emotion we showed today is the passion. We love the sport, football."